Get more jobs with LinkedIn: This is how freelancers and self-employed people use the business network correctly

According to the data, CTyunOS also means that Tianyi Cloud will gradually begin to adopt the underlying core technology. In addition, taking into account the new trends in the operating system industry and its own business needs, China Telecom has launched an operating system based on Huawei OpenEuler – CTyunOS – based on a cloud network integration strategy.

China Telecom is the first in the industry to adopt Huawei’s OpenEuler technology path for all services via CTyunOS. At the same time, it is the first operator to release a double version of OpenEuler based on x86 and ARM, which were developed independently of each other.

China Telecom participated in the work of OpenStack SIG by joining Euler’s open source community. He was involved in the software migration of the OpenStack Q version throughout the process and tested and verified functionality and compatibility.

Following the release of OpenEuler 3/21, China Telecom took action and Kernel SIG worked together to investigate EtMem use cases. China Telecom brought its experience in detecting system resource pressures on the community and provided and delivered PSI tools to the community. 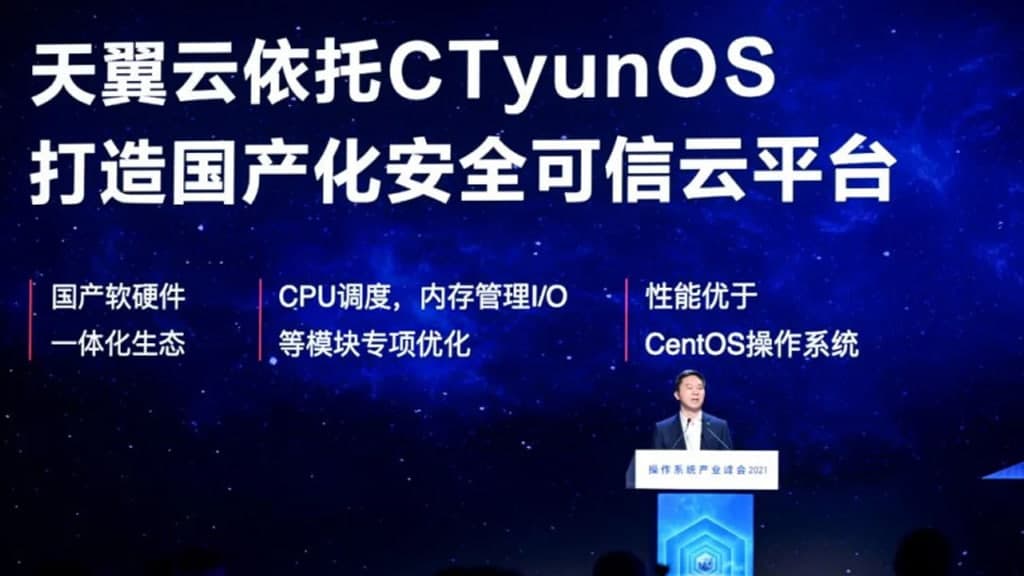 With a number of unique innovative technologies, virtualization components have been perfectly coordinated to provide high-performance virtualization functions with low latency. Together with self-developed cloud computing and other key components, the overall cloud performance improves in several dimensions.

By adapting and optimizing chips for different architectures, it offers homology and heterogeneous support functionality. At the same time, it also significantly improves the security functions of the system and is a professional server operating system for cloud computing.

To optimize the performance of the kernel:

The SEDI and PMU based NMI mechanism can perform more detailed performance analysis. By limiting the amount of memory used by the side cache, your business will run smoother. The statistical profiling extension improves the tuning properties under Perf.  It also supports the hot-swap function of SAS / NVME drives.

If you support intelligent network adapters, you can flexibly implement network and storage offloading, reduce the consumption of host processor and memory, and significantly improve the performance and density of virtual machines.

Improve the functionality of the cloud platform:

The steel bare metal handling component introduces compact and lightweight mirroring that is easier to store and send, and the inline cycle is reduced to minutes. The purely asynchronous system architecture offers flexible and scalable clustering capabilities.

Adaptation to heterogeneous computing power, support of X86, ARM and other architectures and adaptation and optimization in Kunpeng, Feiteng, Zhaoxin and Haiguang. In multi-core scenarios, improve multi-core CPU parallelism in terms of timing and locking, and reduce the conflict over shared CPU resources for task acceleration.

Use ktask to perform single-core serial tasks across multiple processors and take full advantage of multicore. As the speed increases, the KAE engine implements the hardware acceleration of the encryption algorithm. The ARM64 kernel hotfix update uses the functionality of the ARM64 instruction set to improve the performance of the base library and the performance of CRC validation.

It can provide the IMA health measurement framework and the confidential IT framework secGear, which can assess whether the operating environment is safe and reliable, and protect the differences between confidential IT SDK on different architectures, making the calling process more efficient and user-friendly.

At the same time, it can provide a security architecture tool that makes security settings more convenient and automated.

Physical storage efficiency impact. This feature is useful for memory sensitive applications like MySQL database, Spark and other applications. Joint innovation with Tianyi Cloud in the virtual machine scenario. With AEP expansion      media, the business performance is about30% better with the stack attached than with the stack not activated, which improves the cost-effectiveness of the physical storage.

As can be seen from the reports,  Open source teams of   Tianyi    Cloud    and    Huawei   OpenEuler  jointly innovate in the classification of the storage expansion function and have completed an internal prototype verification Tianyi Cloud -virtualisointiskenaarioissa.

Bottlenecks in storage technology to keep storage costs down are high. As the processing power of CPUs has evolved, and especially as the cost of the ARM core has decreased, memory has become a major problem that limits the cost and performance of businesses. Reducing storage costs and increasing storage capacity have become an urgent problem that needs to be addressed. Therefore, Tianyi and Huawei OpenEuler introduced a function to expand memory rating.

The hierarchical memory expansion function does not affect the business operation by DRAM and slow storage devices like SCM, AEP, etc. to  create tiered memory with automatic memory scheduling so that hot data can quickly run in DRAM. a memory area that enables cold data to be exchanged for a slow memory area, which increases the storage capacity and ensures the efficient and stable operation of the core business. 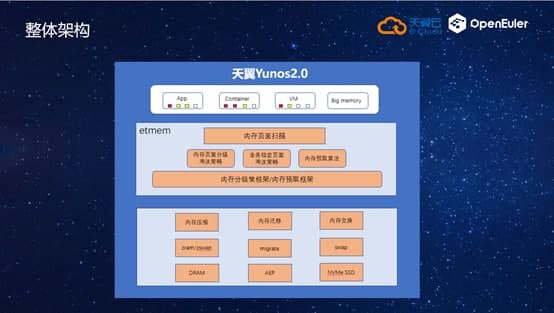 This feature is useful for applications that use a lot of memory and are used relatively infrequently. In these scenarios the effects are greater and the benefits greater.

In the virtualization scenario, expanding storage capacity while reducing storage costs and increasing storage overselling rate is a bottleneck for Tianyi Cloud’s business.

In response to this issue, Tianyi Cloud and the Huawei openEuler open source team decided to review storage classification technology in scenarios where virtual enterprise internal use is not common, while trying to increase virtual machine density and maintain stable or slightly degraded business performance at the same time. 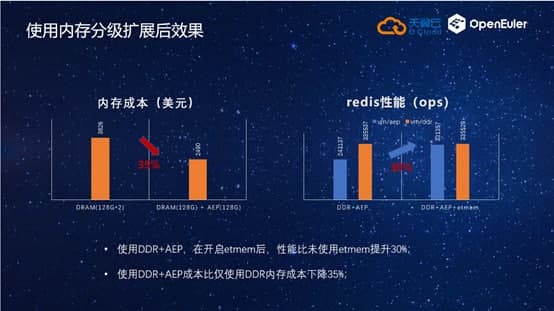 At the same time, using DDR with AEP with the same storage capacity reduces storage costs by around 35% compared to the pure DDR scenario, which significantly improves the profitability of storage usage.

Huawei    officially announced the    donation of the  OpenEuler    operating system   at    the    Operating System Industry Summit 2021.  During the incident, Huawei officially confirmed more information about the close architectural relationship between HarmonyOS and OpenEuler.

Huawei OpenEuler and HarmonyOS have already inherited the shared use of the core technology and will continue to strengthen the shared use in terms of distributed software bus, secure operating system, device driver framework and new language programming in the future. Capacity sharing uses the interoperability of ecosystems.

Dua Taihua, Vice President of Huawei and Head of Data Processing Product Line, said that after the collaboration between Euler and HarmonyOS, this will lead us to Euler devices that automatically detect Hongmeng devices in apps and better serve the whole digital scenario. 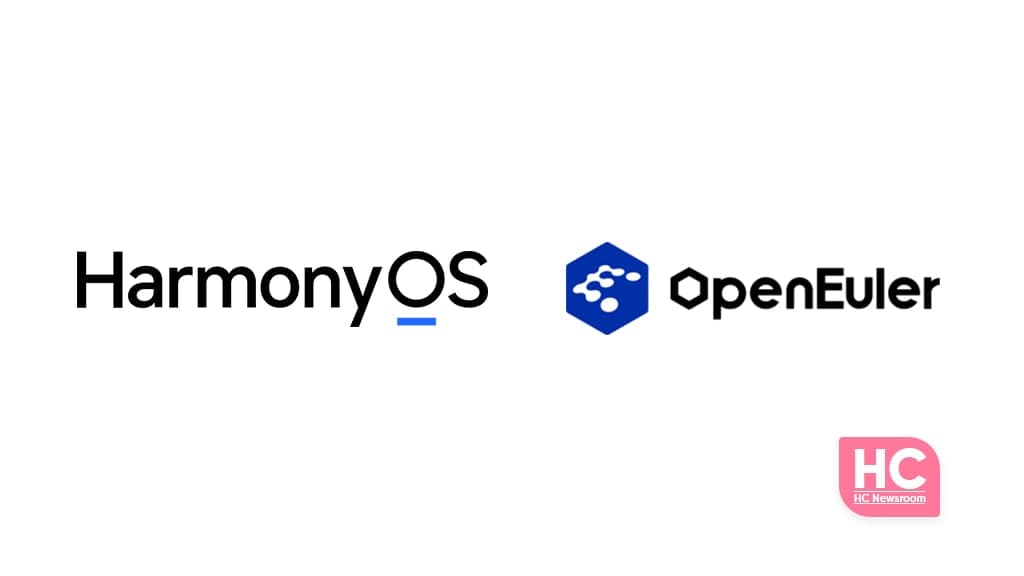 There are currently around 10,000 developers, around 100 special interest groups and 300 partner companies in the OpenEuler community. This operating system offers enormous potential and combines the performance of processors, machines, core software, application software, industrial customers and other partners along the industrial chain.

During the Operating System Industry Summit 2021, Huawei officially announced that it would donate the open source of its OpenEuler operating system to the OpenAtom Foundation.

Huawei will donate all of the OpenEuler open source operating system code, brands, community infrastructure, and other similar assets to the OpenAtom Open Source Foundation to help build an even stronger digital infrastructure, Wang said. Tao, CEO and CTO of Huawei. Steering Committee for Infrastructure Activities.

There are currently around 10,000 developers, around 100 special interest groups and 300 partner companies in the OpenEuler community. This operating system offers enormous potential and combines the performance of processors, machines, core software, application software, industrial customers and other partners along the industrial chain. 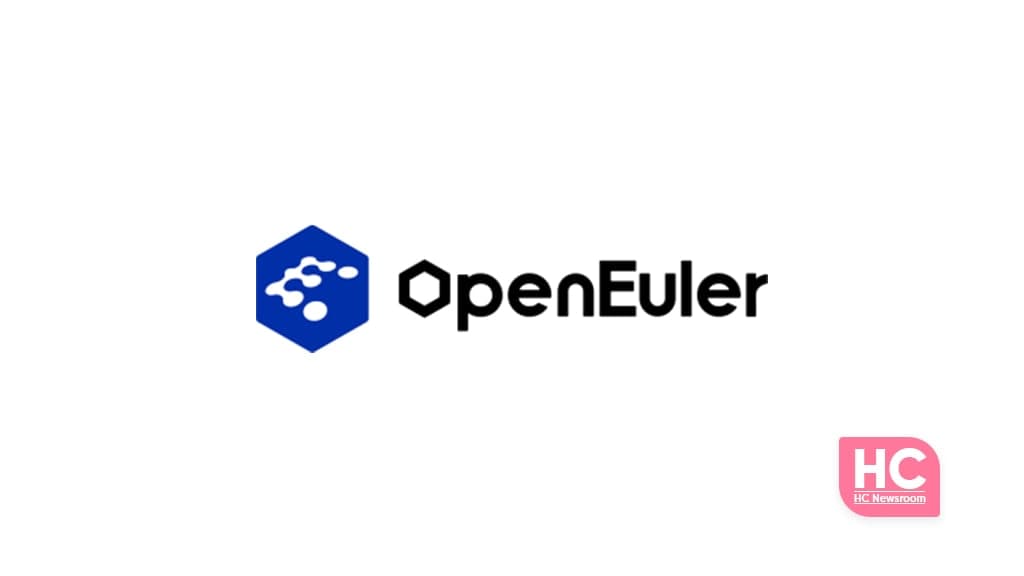 Traditional Chinese operating system manufacturers have also released commercial versions based on OpenEuler, which is part of the core systems of governments, operators, finance, energy, energy, transportation and traffic.

The commercial version of Euler has exceeded 600,000 series and is expected to take its first new market share on Chinese servers in the next year.

Huawei Vice President and Head of Data Processing Product Line – Deng Taihua promised Euler’s gift in the conference opening speech. He said Huawei will continue to invest and encourage the use and development of the OpenEuler operating system in five ways:

In addition to OpenEuler, the OpenAtom Foundation also has open source rights to the OpenHarmony project, the open source code for HarmonyOS.

OpenAtom OpenSource Foundation is a joint community of leading companies such as    Huawei     Alibaba, Baidu, Inspur, Qihoo, Tencent, China Merchants Bank, etc.  The aim is to create a favorable environment for the industry and international open source communities.

Get more jobs with LinkedIn: This is how freelancers and self-employed people use the business network correctly